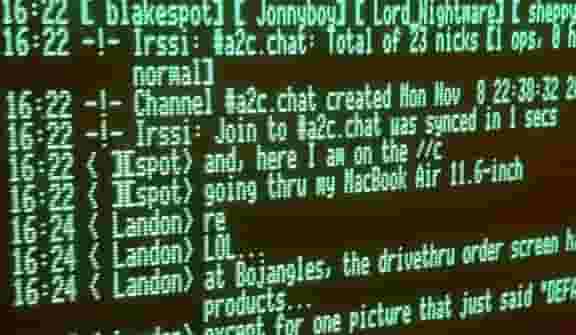 IRC and its use.

Internet Relay Chat (IRC) is an open protocol (RFC 1459) that allows users with an IRC client to exchange text messages in real-time over the Internet. Created by Jarkko Oikarinen while working at the University of Oulu Finland in August 1988, he wrote the first IRC server and client programs. IRC was one of the first chat systems to allow more than two participants to join in a discussion.

In the days of Facebook, Twitter, and other social media platforms, one form of online communication tends to be overlooked: Internet Relay Chat (IRC). It’s a pity because IRC is a wonderful way to get free support, especially for open-source software. In many cases, you can get help directly from the developers themselves.

Many people tend to say “IRC is dead”, NOT True. IRC is widely used in many of today’s technologies despite the fact of being an “old” technology doesn’t mean it’s not worth using.

If you kinda think about it “Email” is the oldest technology still in existence, despite the fact that many newer technologies are trying to find a solution to email and can’t find a way. So, IRC is still around and will be for a very long time and even longer than email, if ever it will have a replacement.

Today people still have the idea it is dead, but in fact, I can give you another example of a very widely used technology that uses IRC chat, that most users don’t even know, it’s called Twitch.tv.

It’s a live streaming video platform owned by Twitch Interactive, a subsidiary of Amazon. Yup! They use IRC chat for their viewers to chat with their host. I can give you another good example called Libera.chat, one of the most widely used IRC networks for developers, programmers, and more, where they chat about open source and others.

Like email, IRC was another application that added to the popularity of the Internet before the existence of the World Wide Web. Using an IRC client, users could connect to IRC servers and message in real-time with people all over the world and join larger groups (channels). Although this is now commonplace, IRC was an early indication of the Internet’s power to create communities where time and distance would have once made it impossible. Like many aspects of the Internet, the request for comments (RFC) system was central to creating and improving IRC.

IRC is also an open standard and therefore belongs to no one and is defined as RFC 1459. That means anyone can read the specification and write a client or server program.

This is a major departure from a platform like Facebook, where outside people are generally not allowed to make their own versions because it’s owned by Facebook.

Plus, since IRC is not owned by anybody, there’s no risk that the service will suddenly shut down if it runs out of money or gets acquired, as has happened to several social media services.

On the other hand, if the individual IRC server shuts down, there’s nothing much you can do about it unless it’s yours.

IRC provides another way of providing support that’s quite different from using the phone or other online methods. It’s also in real-time, so you get answers almost immediately.

Another advantage becomes apparent when you wander into IRC channels for open-source projects (many of which are hosted on Libera.chat). You can ask questions of the developers themselves, a major step up from tech support operators who’ve never even touched the code and are forced to follow a script.

To get onto IRC, the first thing you need is a client. There’s a real embarrassment of riches in terms of clients available. If there’s a computer capable of getting on the internet, chances are there’s an IRC client for it.

Here are some of the major ones for modern platforms:

mIRC: This is the premier client for Windows. mIRC has been in development since the ’90s and has a lot of great features, like a scripting language for automating routine tasks. Unlike many other clients that are free, mIRC is shareware. It’s free for 30 days, but if you want to keep using it, it’s going to cost a one-time payment of $20, which isn’t too bad.

AdiIRC: is a freeware IRC client with multiserver support and a highly customizable interface. An alternative to mIRC, but totally freeware. It offers all the standard IRC features including private chats, basic Identd features, system information, SSL, IPv6, chat logging, and DCC Chat/Transfers. It also offers now playing support for various media players, advanced scripting, themes, MTS themes, plugins, and dockable/undockable activity monitors that let you monitor many channels at once. The program stores all its settings in text files and does not require an installation.

Colloquy: On the Mac side, this is an elegant client. Like many other IRC clients, it’s free and open source. You can choose from many styles for your chat window. You can also get it for iOS, but in this case, you have to pay for it.

XChat: Unix and Linux users won’t be left out in the cold since this is the platform on which IRC originated. In the Linux world, XChat is the graphical client of choice. It’s also available for Mac OS X (in an unofficial version) and Windows.

HexChat: is an IRC client based on XChat, but unlike XChat it’s completely free for both Windows and Unix-like systems. Since XChat is open-source, it’s perfectly legal. For more info, please read the Shareware background.

HexChat was originally called XChat-WDK which in turn was a successor of freaks chat.

Irssi: For Unix and Linux command line die-hards, this is often the text-based client of choice. Although its looks might betray its claim to be “the client of the future,” it’s a fast and flexible client. One advantage the text-based clients have over GUIs is that they work with programs like GNU Screen and tmux. You can log in via SSH to a remote machine, start tmux or Screen, and start Irssi. If you detach your session, log out and log in from another computer, your session will be waiting for you.

ChatZilla: One of the great things about Firefox is how many add-ons you can use to customize the browser. Yes, there’s an IRC client for Firefox as well. It used to be standard with the original Mozilla suite, and it’s still part of the Seamonkey suite.

Mibbit: If you truly insist on using a web browser, you can use Mibbit. The advantage of doing it this way is that you avoid having to install anything and your settings will follow you from machine to machine. This makes it a user-friendly alternative to the tmux/GNU Screen/Irssi solution mentioned above. You can also access Yahoo Chat and Twitter.

The Lounge: This is a self-hosted is client built for the web and just using your web browser. Build on open source and uses the IRC Framework based on KiwiIRC although originally forked from Shout as a separate project from theirs. It uses modern features brought to IRC. Push notifications, link previews, new message markers, and more bring IRC to the 21st century and it is always connected.

Remains connected to IRC servers while you are offline. It is cross-platform. It doesn’t matter what OS you use, it just works wherever Node.js runs. Uses a responsive interface. The client works smoothly on every desktop, smartphone, and tablet and synchronized experience, which always resumes where you left off no matter what device.

KiwiIRC: Most of the most widely used web clients of the next generation and very modern. It’s a self-hosted web client just like The Lounge, which uses the IRC Framework. The Kiwi IRC client is a free and open-source project allowing anybody to contribute to the project.

With an aim to build the most awesome, extendible, and easy-to-use web IRC client we invite anybody to throw in any ideas or changes – no matter how large or minor you may think your idea is. (CyIRC uses this). IRC functionality is also built into several major instant messaging clients, like Trillian, Pidgin, and Adium.

next post How to use IRC!
Back to top
mobile desktop